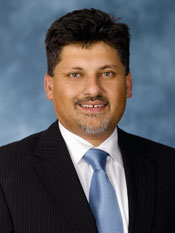 Education and Certification
Dr. Mukherjee is a board certified gynecologist and reproductive endocrinologist. He completed his residency at the Albert Einstein College of Medicine where he received the Leo M. Davidoff Society Award as well as the Schulman Award, and completed his fellowship at Mount Sinai Hospital.

Experience
Dr. Mukherjee is the author of numerous journal articles and textbook chapters and is also the recipient of the prestigious Society of Reproductive Surgeons Award for his outstanding research related to the effects of hydrosalpinx fluid on the outcome of in vitro fertilization.

In addition to his expertise in in vitro fertilization, egg donation and other assisted reproductive techniques, Dr. Mukherjee excels in a wide array of medical and surgical treatments for the management of endometriosis, fibroids, abnormal uterine bleeding, and abnormalities of the fallopian tubes. He has lectured and written extensively on the diagnosis and treatment of patients with recurrent spontaneous abortions.

New York Magazine included Dr. Mukherjee in its 2007 and current 2008 “Best Doctors” issue and SuperDocs recently lauded him in their 2008 list. He has had numerous television appearances that include the Fox News Channel’s “Healthwatch” and “Mike and Juliet Show”.