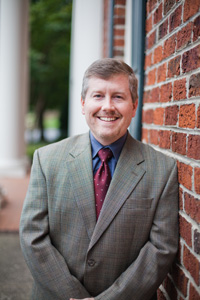 Education and Certification
Dr. Payne is a graduate of Furman University in Greeneville, SC with a B.S, in Biology with supporting chemistry courses. While at Furman, Dr. Payne was awarded the Furman Scholars’ Scholarship, J.E. Sirrine Scholarship, Army ROTC Scholarship, and American Legion Scholastic Excellence Medal, and was named to Furman’s President’s and Dean’s List.

Dr. Payne was awarded early acceptance to medical school after his sophomore year at Furman and after graduation attended the Medical University of South Carolina, College of Medicine, in Charleston and graduated in the top third of his class.

Dr. Payne completed an Obstetrics and Gynecology internship and residency training at Madigan Army Medical Center in Fort Lewis, WA. After his residency, he served as an OB/Gyn Consultant for the South East Regional Medical Command at Eisenhower Army Medical Center at Fort Gordon, GA. He concurrently served on the Medical College of Georgia faculty as a Clinical Instructor in the Ob/Gyn department and was the the Chief of the Gynecology service at the Augusta Department of Veteran Affairs Medical Center.

Dr. John Payne completed a 3-year subspecialty fellowship in Reproductive Endocrinology and Infertility at Duke University Medical Center. He had an academic appointment as Clinical Associate in the OB/Gyn Department at DUMC.

Experience
AAfter his REI fellowship, Dr. Payne was the Chief of the Reproductive Endocrinology and Infertility Division in the Department of Ob/Gyn and the departmental Performance Improvement officer at Walter Reed Army Medical Center (WRAMC) in Washington, DC.. He held an academic appointment as Assistant Professor of the Ob/Gyn Department at the F. Edward Hébert School of Medicine, Uniformed Services University of the Health Sciences in Bethesda, MD, where he was actively involved in the education of medical students.

In addition to his administrative responsibilities of managing the WRAMC REI division, which included the military’s largest assisted reproductive technology (ART) program, his duties included a busy infertility practice, performing advanced laparoscopic and hysteroscopic surgeries and microsurgical tubal reanastomoses, clinical research, teaching and training WRAMC OB/Gyn residents and fellows from the Combined NICHD/Federal fellowship in Reproductive Endocrinology. Dr. Payne was awarded the Army Meritorious Service Medal (MSM), with two oak-leaf clusters, while serving in Iraq with the Task Force 47th Combat Support Hospital as Chief Gynecologist, Senior Triage officer, and surgeon on a trauma team in support of Operation Iraqi Freedom in 2006. He received an honorable discharge from the Army as a Lieutenant Colonel in September 2007 after successfully completing his military service obligation with distinction.