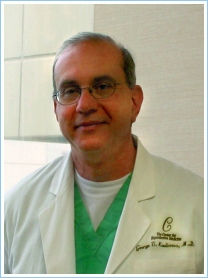 Dr. George T. Koulianos is the director of The Center for Reproductive Medicine, a participating provider in the WINFertility Network.

He completed a fellowship in reproductive endocrinology in the Department of Obstetrics and Gynecology at Tulane University School of Medicine in New Orleans, Louisiana, and at the University of South Alabama in Mobile.

While at Tulane he was awarded the CIBA Fellowship for Research in Endocrinology of the Post Reproductive Woman by the American College of Obstetricians and Gynecologists. He is board certified in Obstetrics and Gynecology.

Adjunct Clinical Assistant Professor at the University of South Alabama

Experience
Prior to founding The Center for Reproductive Medicine in 1993, he served as assistant professor of Obstetrics and Gynecology at the University of South Alabama.

His professional accomplishments include winning the ACOG/CIBA (America College of Obstetricians and Gynecologists) Fellowship for Endocrinology of the Postreproductive Woman, authoring several book chapters and articles with original research for peer review, and presenting original research at numerous national and international meetings.

Dr. Koulianos speaks nationally on fertility issues. Professional memberships include the American Society of Reproductive Medicine, American College of Obstetricians and Gynecologists, Society for Assisted Reproductive Technology, State and County medical societies. He is a member of the board of censure of the Mobile County Medical Society and secretary of the Mobile County Board of Health.