Gestational Surrogacy and the Law

A gestational surrogate or gestational carrier is a woman who carries a baby that was conceived via IVF, using the intended mother’s egg or a donor egg, and the intended father’s sperm or donor sperm. The surrogate has no genetic connection to the baby. She carries it and gives birth to it, then releases it to the couple who contracted with her. In most cases the surrogate is a commercial surrogate, who is paid a fee to carry and deliver the baby. Sometimes a friend or family member will volunteer to be an unpaid surrogate mother. This is known as traditional or altruistic surrogacy, and is comparatively rare. 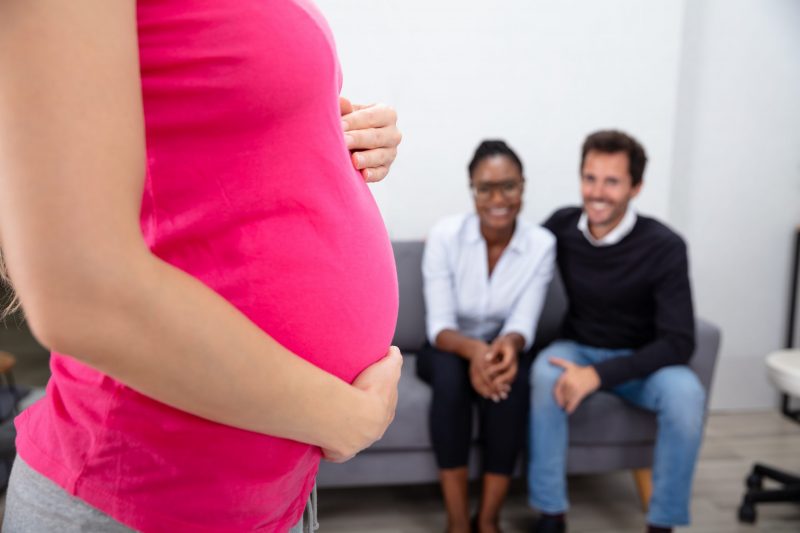 Why do some people need a surrogate to have a child? The most common instance is when a male same-sex couple wants to have a biological child. In some cases a male-female couple decide to use a surrogate because the female partner is unable to carry a child for a number of different reasons, including multiple miscarriages and physical problems with her uterus. Jimmy Fallon and his wife Nancy Juvonen turned to surrogacy after five years of unsuccessful fertility treatment and were able to have two children. Sarah Jessica Parker and Matthew Broderick had difficulty having a second baby although their first child was conceived naturally, so they turned to surrogacy, and had twins.

The laws regarding surrogacy vary from state to state and from country to country. The legality of surrogacy and how it is governed by law is crucial, because it determines parental rights. In some countries surrogacy is a criminal offense. Australia, Canada and the U.K. allow traditional surrogacy, but commercial surrogacy is illegal. Commercial surrogacy became illegal in India in 2015.

In the U.S., surrogacy and its legal issues fall under the individual states’ jurisdiction. There are several states which don’t have any laws governing surrogacy, so contracts may or may not be enforceable. Some states permit only uncompensated surrogacy, such as New Jersey and New Mexico. Other states only permit surrogacy for married couples, including Florida, Tennessee and Texas. New York and Michigan prohibit surrogacy contracts and hold them unenforceable. Some states which don’t have laws about surrogacy have upheld contracts, such as Minnesota, Massachusetts, Connecticut and California.

In some states, you may still have to pass adoption proceedings to gain legal custody of the child. In other states, you can make a “declaration of parentage” before birth and avoid adoption proceedings. California is the only state that recognizes parentage of the prospective parents if at least one of them does not have a biological relationship to the child, i.e., if donor eggs and donor sperm are used. You can see that the legal issues are complicated, and it’s extremely important to consult an attorney experienced in reproductive law before you begin.

What If You Need a Surrogate?

If you ( or you and your partner) need and want a gestational surrogate to have a child, you should work with a reputable fertility center, a bona fide surrogacy agency and a lawyer experienced in reproductive law. There are about 100 surrogacy agencies operating in the U.S. It’s essential to have a legal contract with the surrogate to protect you both and make sure she agrees to all her responsibilities.

The cost of surrogacy varies tremendously and can run from $100,000 to $150,000 or more. It includes: the cost of IVF for the female partner and/or egg donor (if you are using donor eggs), which averages around $12,000 per cycle plus the cost of fertility medications, which average around $4500 per cycle but can go up to $10,000 or more, depending on the female’s age and response to treatment; embryo transfer fee, which is generally $1500 to $2000; if you are using a commercial surrogate, the surrogate’s compensation, which runs from $38,000 to $50,000, and the surrogate agency’s fee, which can be more than $20,000; and, if you are using donor eggs (either fresh eggs or frozen eggs), the egg donation fee, which ranges from $7,000 to $10,000 and medical cycle management by the fertility practice. Genetic testing is a newer addition due to improving technology with costs from $1000 for blood work to $5,000 for embryo biopsy and genetic testing for clinical issues or sex selection. Other expenses include travel allowance and life insurance for the surrogate, psychological screening and support, and legal fees. A major cost factor is whether the surrogate’s health insurance will cover her expenses to carry and deliver the baby or whether you will have to pay for them or buy a surrogacy-pregnancy insurance policy. Even if her insurance covers the pregnancy and delivery, the prospective parents pay the cost of any copays and other medical expenses not covered by her insurance. Despite the hefty costs, about 750 – 1000 babies are born to gestational surrogates in the U.S. each year. That’s about 1500 happy parents!

44209Gestational Surrogacy and the Law

44178Gestational Surrogacy and the Law

44174Gestational Surrogacy and the Law

44154Gestational Surrogacy and the Law